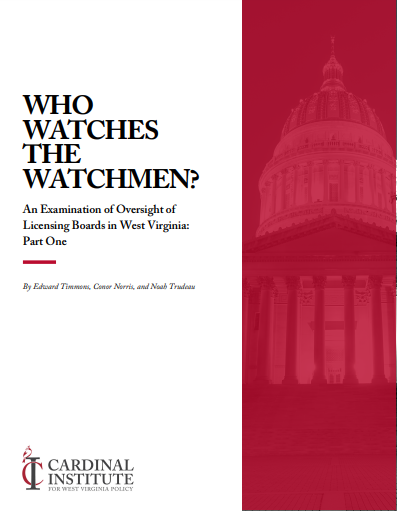 Who Watches the Watchmen?

An Examination of Oversight of Licensing Boards in West Virginia

Nearly 22% of workers in the Mountain State are licensed, the eighth highest in the nation. Occupational licensing makes it a crime to perform a job for pay without first meeting certain requirements and applying to the government created licensing board. The traditional motivation for licensing a profession is maintaining some minimum quality standard. Unlike tangible purchases, such as a car or home, it is impossible for consumers to inspect the quality of a service they will receive personally until after the service has been performed. For example, you can’t know how good of a haircut you will get until after your hair has been cut. In contrast, the provider of the service has some knowledge of how good they are at their job and what level of quality they can provide. In theory, licensing can help address this economic problem of “asymmetric information.”

Regulators should have some level of expertise to ensure that regulations are properly designed to achieve their goals. When determining who should sit on the licensing board as experts, the most obvious answer is people who are already practicing in the field. Who knows the job better than someone who is already doing it? A licensing board of individuals who are knowledgeable on the conduct and standards of a profession would appear to be qualified to supervise the creation and administration of exams, review licensing applications, and issue licenses to new individuals. But does this additional layer of protection come with a cost? Licensing boards such as those currently under scrutiny in West Virginia can pose a problem to consumers.

Who is regulating the licensing boards in West Virginia? Are there other impacts from not providing a layer of oversight to licensing boards in the state? We first turn to a key Supreme Court case and its implications. Then we discuss some avenues for reform to help minimize the consequences of mountebanks in the Mountain State.

You can learn more about other kinds of occupational licensing reform by reading our blog!