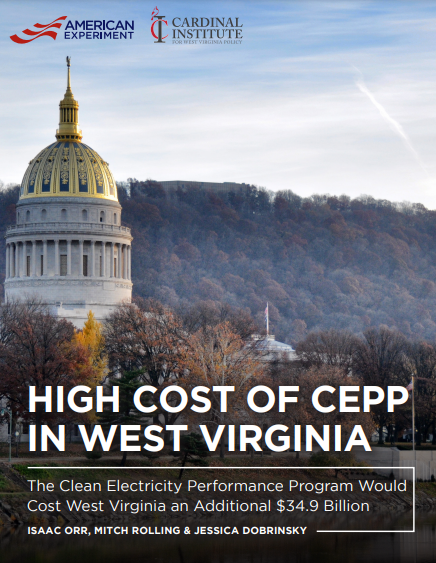 The High Cost of the CEPP in West Virginia

The Clean Electricity Performance Program (CEPP) advanced by Congressional Democrats as part of the proposed $3.5 trillion reconciliation package would have required electricity providers to increase the amount of carbon-dioxide-free electricity sold on their systems by 4 percent every year or pay penalties.

Media reports indicate that the CEPP may no longer be part of the reconciliation package due to the objections of West Virginia Senator Joe Manchin.

The removal of the CEPP from the reconciliation package is undeniably good news for Senator Manchin’s constituents because the proposal would have significantly increased the cost of electricity for West Virginia families and businesses, even if it had been amended to allow carbon capture and sequestration (CCS) equipment on coal plants or allowed unabated natural gas (UNG) to substitute for coal in an attempt to win Manchin’s approval.

Achieving CEPP targets in West Virginia under the Renewable, CCS, and UNG scenarios would cost an additional $34.9 billion, $24 billion, and $6.1 billion, respectively (in constant 2021 dollars) compared to operating the current electric grid. Rising costs would cause electricity prices to increase by 25 percent in 2031 in the Renewable scenario, 22.5 percent for the CCS scenario, and 8 percent for the UNG scenario, compared to 2019 rates.

If borne by residential, commercial, and industrial electricity customers in West Virginia, rather than federal taxpayers, the additional costs imposed by the CEPP would be more than $1,100 per customer, $760 per customer, and $190 per customer per year through 2052 for the Renewable, CCS, and UNG scenarios, respectively.

Higher electricity prices would lead to higher costs for all West Virginians, but low-income households would be disproportionately hurt because these families spend a higher percentage of their income on energy bills relative to other West Virginia households.

West Virginia would also be harmed by meeting CEPP objectives under the Renewable scenario because it is a large exporter of coal-fired electricity supplied by West Virginia coal mines. As a result, a forced transition to wind and solar electricity would be a one-two punch to West Virginia’s economy by increasing the cost of electricity and destroying thousands of high-paying coal mining jobs in the state.

Isaac Orr is a policy fellow at Center of the American
Experiment, where he writes about energy and
environmental issues. Isaac has written extensively on
hydraulic fracturing, frac sand mining and electricity policy,
among other energy and environmental issues. His writings
have appeared in The Wall Street Journal, USA Today,
the New York Post, The Hill, Orange County Register, The
Washington Times, and many other publications.

Mitch Rolling is a Policy Analyst at Center of the American
Experiment, where he conducts research and writes about
energy issues. Prior to his current role, he interned at
the Center for several months and wrote extensively on
renewable energy and electricity policy. Several of Mitch’s
writings have since appeared in numerous national and
Minnesota publications, and his research has been cited by
publications such as The Wall Street Journal.

Jessica Dobrinsky was not born in West Virginia, but has
claimed the Appalachian mountains as her home. She
graduated from West Virginia University in 2020 with a B.A.
in Criminology and currently attends American University
where she is working on a Masters in Public Administration
and Policy. She is thrilled to join the Cardinal Institute team
as a Policy Development Associate